Compiling and distributing Q&A on issues faced by local governments 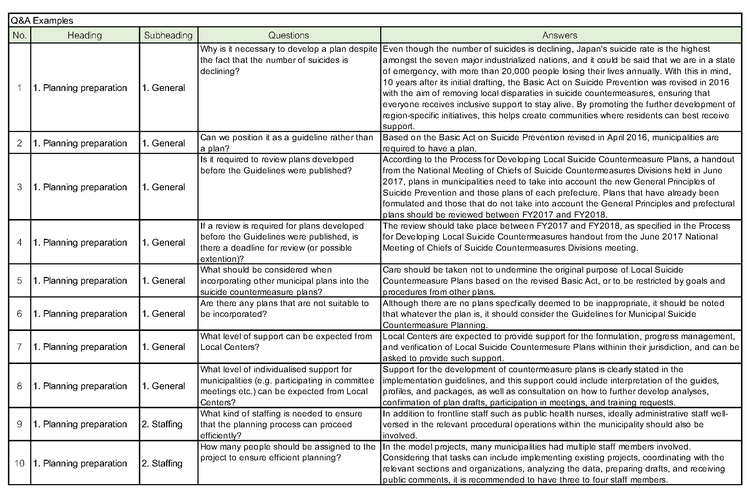 Above is an excerpt from the Q&A. It currently contains more than 250 questions and answers divided into seven categories, including "Building a collaborative system" and "How to analyse suicide trends”.

The Q&A list was originally one of the reference materials attached to the Guidelines for Municipal Suicide Countermeasure Planning prepared in March 2018 to Local Centers by the Japan Support Center for Suicide Countermeasures (JSSC), predecessor to the JSCP. The history of formulation was as follows

The Basic Act on Suicide Prevention was amended in 2016, requiring prefectures and municipalities to formulate suicide countermeasure plans, and in FY2017, the Office of Suicide Prevention of the Ministry of Health, Labour and Welfare (MHLW) implemented the Model Municipal Suicide Countermeasure Plan Formulation Project (Model Project). Fourteen model municipalities were selected with the aim of sharing the results of their planning techniques across the country and helping other municipalities to develop their own plans.

Based on the results of the Model Project, JSSC issued the Guidelines for Municipal Suicide Countermeasure Planning to Local Centers nationwide in March 2018. At the time, a Q&A list was also included as one of the reference materials, prepared to assist local governments in dealing with issues they typically face, such as whether the local plans are appropriately formulated, how to proceed with the projects once planning is complete, and how to evaluate project success. The Q&A book has been updated twice, in September 2018 and July 2019, to reflect inquiries made at training sessions for local governments and Local Center liaison councils.

In May 2020, JSCP opened the Concierge for Local Government Supporters as a consultation and support service for suicide countermeasure staff at Local Centers, prefectures, designated cities, and municipalities throughout Japan.
In addition, frequent inquiries will be organized as a collection of Frequently Asked Questions (FAQs), made available to relevant authorities.
NB. In the FAQs, information identifying specific municipalities is removed.